As the Dude has hinted, a significant leadership shakeup is coming to a close, and while he had some speculations of where he would end up, it turns out that they were completely erroneous.

The Dude's team was expecting to be duct taped to a new, inner-circle Director (title is Biz Dev, but he will be driving the strategy and business models) that seemed like a good fit.

Alas, it wasn't to be so. Last Monday, as the leadership horse-trading was underway, we learnt that we would instead report to the VP/GM directly. Gulp. New-ish VP (9 months) without a deep understanding of our business and our roles in the business. In fact, the word we heard through our former Director was that she didn't understand what we do, and why we exist.

The Dude wouldn't call this an "oh shit" moment, but it is certainly a situation for nuance, reflection, and caution.

Tuesday morning the four of us (our "team") got an invite for a "sync" with our new boss, the ahem VP of our business unit.

Notably initially absent was our new-ish manager whom the Dude wrote about a couple of months ago. Yikes.

8:30 AM, Wednesday Morning. Video on (we're still remote and will be until the Dude guesses Spring 2022) and we're up.

As they say, you only get one chance at a first impression, so make it count. Some polite chit-chat, and our whole team is on video. Good. Our manager who was omitted from the original invite is there. That is good. The Dude has been coaching him in the ins and outs of product and portfolio management.

The questions are simple, and the Dude and one of his peers do much of the talking. (Sidebar: the peer who the Dude is sharing the limelight with is one of the best hires the Dude has ever seen. She is sharp, can focus on what is important, and makes a strong impression.) The Dude describes some of the challenges (think of product management as the dumping ground for odds and ends of the trivial tasks - ya know, the garbage collector) and even highlights a few recent and on point examples.

It's going well. He explains our central role in balancing the forces of the varied teams (the bicycle wheel analogy) and the VP is nodding. We talk about how she is planning on identifying a lot of these lost puppy tasks and get them to their rightful owners.

Some chiming in by the Dude's direct manager is helping amplify the message and value of our team.

The Dude should add that his path has crossed with the VP a couple times in the prior few weeks. Mainly in an interaction with a BU's partner enablement team where the Dude was able to deftly relate their needs to what we had, and describe how we could work together.
That earned a teams message directly from our VP saying "nice job"

One thing the VP was clear about was that she didn't intend to manage the team long, perhaps a quarter or so, while looking for a Director of Portfolio Management. She mentioned that she was looking primarily for a person who could talk deeply about the gamut of technologies our products cover, and secondarily is the product management skills.

Honestly, this seems sensible for that role, given what we do (technical education) where balancing external stakeholders is crucial for our success.

Then, the Wheels come off

With about 4 minutes left, there were two of the Dude's peers who hadn't spoken yet.

They decided to speak up.

First up is the peer who has been here the longest. He has his routines, and he doesn't do well with change, preferring to keep his head down, and not engage directly. Not great attributes for a product manager, but when he does talk, it doesn't usually go well.

His points to make were that:

To be honest, this peer has a history of asking questions or making statements that are as tone deaf as this. No real surprise. But this might be a fatal mistake.

Next up, with less than a minute to go (and the Dude had to drop at the half hour for another important launch meeting with Marketing) is our "bull in a China shoppe" colleague. He has a history of throwing elbows, and pretty much pissing off everyone on his working groups, being that "arrogant" product manager who pisses in the Cheerios because he has a BSD.

Our new VP has made it clear that we are - as an organization - transitioning to an agile work flow. It is not easy, or natural, but it is her #1 cause and focus. It has been repeated over and over in all hands meetings, in our annual goals, and been pushed down through the organization to the lowest levels. We were all forced to take training on it, 600+ people at $1,500 a pop is a significant investment.

Suffice it to say that it is what is going to happen, in some form.

So, what does the "Bull in a China Shoppe" do? He tells her that he doesn't think it can be done, that our processes are too rigid, and that we rely too much on outside development partners, and essentially tells her to her face that she is an idiot for making this a priority.

The Dude doesn't know where to start. But if his two peers had just outright asked to be put on the next RIF list, they could hardly have been more effective.

People: DO NOT CHALLENGE YOUR NEW BOSS' COMPETENCE IN YOUR FIRST MEETING.

Strike that. Don't ever directly challenge your top leader unless you want to find a new job.

Not more than an hour after that first call, the Dude gets a ping in teams from our VP. She is in a cross functional BU tech call, and had a screen grab about some not new technology, but it is becoming higher visibility and importance, and the Dude fills her in on some details, and does some digging. (and yes, this is about to go nova, so we need to get on top of it)
Good interaction.
Then, as the Dude is reading before bed (as is his custom) on his iPad, he gets some more teams messages with the VP. More on the same technology, she is on a cross regional alignment call, and the Dude helps fill her in on the details.

The Dude is thinking that he is demonstrating his worth, his ability to adapt, and his willingness to do the extra work. The next morning before walking his dog, he does some research, and later in the day reports it to the VP.

VP's response? Thanks, and she asked about the Dude's dogs.

The Dude is beginning to think he might be OK after all. 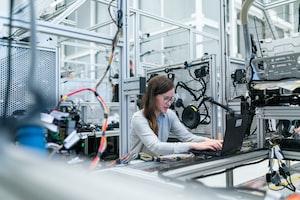